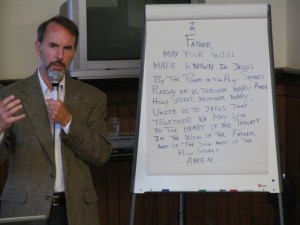 Ireland was known as a land of saints and scholars for centuries. It has lost a lot of that religious & academic prestige. But thankfully, we can call Ireland the land of miracles. Certainly with the present origins science tour of Ireland, this is what it feels like thus far. Hugh Owen’s origins science tour program has been planned back as early August, and since then we’ve had one miracle after the next. The latest of which is an Irish priest announcing from the alter the upcoming talk on Special Creation vs Darwinism. Hugh Owen was in his element listening in the pews of an R.C. Church in Dublin city. This is the 2nd Irish priest in the space of a month to announce these important November seminars.

What else has been stirring in the origins science pot?

The fact that all our seminar venues are situated right beside Catholic churches is another miracle milestone. We really got some breaks here. Hugh Owen is now more likely to get a respectable seminar turn out. Another happy miracle was a kind donation to do a press release in the respectable Catholic Voice newspaper. This has really bolstered our Hugh Owen and Greg Clovis promotional campaign. Another good miracle is the amount of young Irish Roman Catholic men who consider evolution to be bogus science. In this respect, God is really opening doors to reinvigorate our church. Daylight Origins Society in Ireland had a good future, thanks to the growing number of important connections made of late. We count this as another miracle for us and Hugh Owen’s Kolbe Center. Praise the Lord!

We don’t know. It is a wait and see ministry from a faith perspective. But we are certain that the Lord will send people to our origins science seminars over the next few days. You too are most welcome to see Hugh Owen in Ireland this early November. Kolbe Center talks are being had in Cavan, Dublin, Cork and Donegal. For information check out our Special Creation Seminar page. See you there God willing!