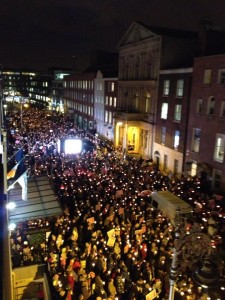 This Tuesday (4th December 2012) evening at 16:30 a growing crowd gathered on Molesworth street adjacent Leinster House, Dail Eireann (Ireland’s parliament) to show their pro-life sentiments in the face of the real push to legislate abortion in Ireland. By 17:30 the crowds gathering swelled to upwards of 8,000. It was clear, despite all the media hysteria over the recent tragic death of Savita halappanavar, that the Irish are not going to accept any hasty rush to legislate for abortion before an inquiry into Savita’s death is fully investigated and concluded. At present, there are strange contradictions seeping out around this death, and so it would be inappropriate at present for the Government to rush through abortion legislation.

There were some quality testimonies given by Cliona and Caroline, two Irish mothers who experienced problems with their babies health before giving birth. Cliona witnessed that she had her baby, who lived for 17 minutes after birth, and that the memories of her child developing in her womb gave her great joy despite the knowledge that her child would die soon after birth. Cliona had her child baptised, and held her new born son in her arms before he left this world behind. Bereavement followed, but the intimate moments between mother and child gave Cliona solace. Caroline had a similar but diverging story to tell, and she is now a mother of three. Darren of Spirit Radio was the vigil MC and he had no trouble warming up the large gathering as he transcended the sentiments of the Irish people. Niamh Ní Bhriain’s rousing speech hit the nail on the head, and high time pro-lifers heard the truth vocally proclaimed, affirming their heart’s sentiments. Again Enda Kenny was reminded of his Fine Gael (political party) pro-life promise. As the Irish TDs (politicians) left Leinster House, the pro-life gathering were given the chance to raise their voice and demand that Enda keeps his pro-life promise. It was through this pro-life promise alone that gave Fine Gael such a strong result in the last Irish general election. 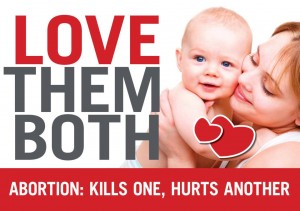 The latest campaign succinctly get the point across, protect the mother and child's life

RTE (Ireland’s national broadcaster) were present at the event, but somehow got the official attendance figures mixed up, claiming initially that just over 1000 prolifers attendended. But thankfully they came good in the end and revised the figures upwards. Upwards of 8000 people had enough compassion to turn up and support pregnant women as well as their unborn babies through this prolife vigil. 8000 is more than a stand against the media, the government, and the abortion industry who are shamelessly exploiting the death of poor Savita Halappanavar to rush through abortion legislation.  Our thoughts and prayers are with Savita and her next of kin.

Abortion and the evolution connection

But why are the government and media pushing so hard for abortion, and why are there groups who are unashamedly pro-abortion? Perhaps their Catholic education failed to refute the false ideology that is Darwin’s theory of evolution, and Haeckel’s fraudulent embryonic diagram often touted as evidence for evolutionary re-capitulation in Catholic schools. No wonder then we have a pro-abortion lobby in Ireland, they are deceived into believing the embryo starts life as if a fish. Kill the fish, no harm done… they believe…